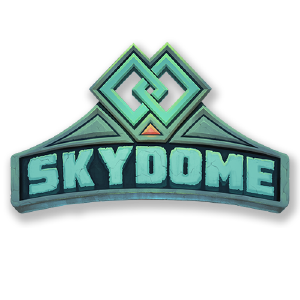 Skydome is a multiplayer, action-strategy, tower defense game for PC's Choose your champion and battle alongside teammates to conquer the Skydome

Want to know more? Join us in the upcoming closed BETA. Be a voice in the development, chime in.

To the Skydome![edit | edit source]

Inside the beautiful arena located in the floating archipelago in the sky, nations and tribes of the world can battle against one another for global supremacy. The winner amasses much more than riches and glory, being capable of using the Skydome's mysterious power to influence the world according to its view. The kingdoms brave enough to participate, must gather an ensemble of its most capable and skilled champions to represent itself.

This is an online multiplayer game for computers, in the Skydome two teams of four players battle against one another. You'll need to work as a team if you want to stand a chance in keeping control of your field, properly defending your artifact and swiftly taking out your foes'!

Get your strategies straight![edit | edit source]

Summon and send an army of minions into the enemy field to conquer their artifact. While also making sure to defend yours from impending waves of deadly creatures. Choose which kind of creatures and where to deploy them to better counter the opposing team!

AND A GOOD DEAL OF STRATEGY

An army made of the most diverse and powerful kinds of creatures that can be spawned right into the enemy field. Use them to destroy everything and everyone in their path, always conquering more and more field area towards the enemy artifact.

AND THE INVADER'S NIGHTMARES

The contestants of the Skydome are unique not only in charm and personality, but also in their multiple and resourceful one of kind abilities. Work together with your team defending your artifact against endless and ever stronger enemy creatures. Be ready and make those unwelcome creatures regret their visit!

SERIOUSLY, DO NOT LET THEM PASS

Be prepared for the unexpected. Get tactical with a large number of defense mechanisms at your disposal, customize the battlefield and make it your own. Show the enemy that your team can withstand anything and everything they throw at you.

And really, much more[edit | edit source]

JUST THE TIP OF THE ICEBERG

We've very high ambitions and so much more planned for Skydome's future that we have yet to share with the world. We invite you to follow us on Facebook and Twitter not just to be always kept updated on the latest, but to chime in and help us deliver the very best experience.